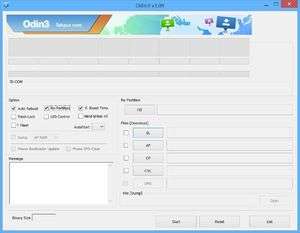 “Allows you to update your Android firmware without fuss”

A review of Odin3 by Felix Cheng

Odin3 is a free PC application which can flash and root Android-based phones.

With Odin3, you can flash your Samsung cell phone and overwrite the system files. You can install any version of the Android OS on your smartphone before your phone manufacturer has released an update, putting you on the bleeding edge of software. Once your phone has been rooted, you are able to do all sorts of things.

Odin3 makes a phone rootable by installing a custom kernel giving you permanent root access. Users are however cautioned because installing custom operating systems or kernels can brick your device.

Please note that in order for Odin3 to run properly, you must run it as an administrator. In addition, edit the INI file included to your specification.

Odin3 is software which can update phone firmware.

This download is licensed as freeware for the Windows (32-bit and 64-bit) operating system on a laptop or desktop PC from mobile phone tools without restrictions. Odin3 3.14.4 is available to all software users as a free download for Windows 10 PCs but also without a hitch on Windows 7 and Windows 8.

Compatibility with this Samsung firmware updater software may vary, but will generally run fine under Microsoft Windows 10, Windows 8, Windows 8.1, Windows 7, Windows Vista and Windows XP on either a 32-bit or 64-bit setup. A separate x64 version may be available from Odin3.